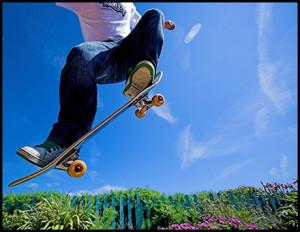 “Let me get a Monster,” Matt said, his sunglasses reflecting twin pine trees.

“No. Ick. We’ll go to Starbucks.” His mother, Daisy, glanced at him as she turned onto Fremont. “You look like a rock star in those.”

As they stood in line at the coffee shop, Daisy was surprised at how tall he’d grown—at least six inches in the past year—she barely came up to his shoulder. It seemed just yesterday he was a toddler, clinging to her like an entitled chimp, refusing to walk when he could be transported. Now, at fifteen, Matt was a young man: long black hair, pale skin, black-rimmed eyes. He was shockingly handsome and as wild and out of control as she’d been as a teen. A pierced eyebrow, a pierced lip, gauged earlobes—these no longer fazed Daisy. She’d fought the battle of the piercings and lost long ago. Today, there were more serious issues at hand. They were on their way to Matt’s summer school class. He’d been suspended twice his freshman year for smoking pot, then expelled for pulling the fire alarm during finals week, and had earned zero credits.

A short latte and a six-dollar soy white chocolate mocha later, and they were on their way. Baskets of fuchsias hung from the streetlamps, and a frazzled terrier sat on a table, staring into the shop at its owner. They walked to the car beneath a sky as blue as swimming pool water. Sunlight streamed through the windshield, clean for once, and sparkled on the hood. Matt, dressed in sagging cargo shorts and a Misfits T-shirt, was in a good mood. “Man, summer school’s legit. Nobody hassles you. They don’t even care if you smoke.”

Please do not smoke, Daisy thought, biting her tongue to avoid the fight. “And you go,” she said. “You’ve gone every day.”

“Right. Because nobody cares.”

“So it’s the caring that makes you want to…act out,” she began.

“Don’t be so dramatic. You analyze every single thing.”

“FORGET IT.” Matt plugged in his I-pod and blasted one of the nastier rap songs she’d heard in a while, something about “chapped dicks” and “dentists” with “erections like injections” and, oddly, “Chloraseptic.” Judging from the chorus, the title seemed to be “Put it in Ya Mouth.”

Things devolved from there.

Trick Daddy’s “Let’s Go” blasted on the stereo, a song so awesomely aggressive it made Daisy want to run down the street and kick over recycling bins. As she committed criminal mischief in her mind, she followed the curve of 21st to Sandy Blvd., careful to avoid the cyclists in the bike lane. Before she knew what was happening, her son was hanging out his window, cursing and flipping off a bike rider behind them. “Matt, no,” she cried.

Too late. He continued to yell.

“Why did you do that?” she said when he sat back down.

“He punched our car.”

Shit. The stoplight on Sandy turned yellow then red. “Goddammit, Matt. Here he comes.” She watched in the mirror as the bike rider pulled up beside them and started to punch the window. Oh my God. Daisy tried to reach her phone in the backseat, but her seatbelt had locked. She unhooked it but still couldn’t reach the phone. What was she going to do, dial 911 and report a rabid hipster attack? She honked the horn, long and loud. The driver beside her, a man in a business suit, looked at her but did nothing. It all happened so fast. Matt rolled down his window and the biker, skinny and red-faced, with purple tape on his handlebars, reached into the car and tried to grab him. Daisy screamed. Matt opened his door, knocking the guy backward, and threw his coffee on him. “You better back the fuck up,” he yelled. The light changed. The biker rode off. Daisy drove straight—she’d go the long way just to get away from this maniac. Which maniac, the biker or her son? She couldn’t quit shaking. “Why did you do that? You don’t mess with people. You don’t know what kind of crazies are out there. You could get shot. It happens all the time.”

Matt was pumped. On fire. Cheeks flushed, green eyes bright—it was the most animated she’d seen him since puberty. She could practically smell the testosterone radiating off his body. “What a pussy. That’s right. Mess with me and get your ass beat.” He said the last part like a rapper, the word “beat” rising in a mocking tone.

“Never do something like that,” she cried. “I don’t want to die because you’re trying to be a macho man.” Tears burned her eyes. She’d thought for sure the guy was going to pull out a gun and shoot Matt—or her—as they sat in the car, stuck in Portland traffic.

“Macho man.” Matt laughed. “Would you rather have a macho man or a bitch for a son?”

“You’re fear based,” he said when he got out of the car at school. He shook his head, disgusted. “You live your life in fear. You may as well be dead.”

“Thank you for the advice. I’ll take it into consideration.”

He lingered at the window, and when he spoke again, his voice was soft. “You know, just because someone goes crazy and shoots a person doesn’t mean it’s going to happen every single damn day.”

“Love you, Mom.” Matt reached out and patted her shoulder, awkward like a dad.

Daisy sighed. “Love you too.” She watched as he jumped on his skateboard and coasted down the sidewalk, tall and laid back, long hair streaming behind him, king of his teenage world. God, how she’d love to feel that way again: invincible, insane and alive. Matt stopped at a group of kids smoking on the corner and kicked his skateboard neatly into his hand. As she pulled into traffic, his words echoed in her mind. You may as well be dead. He had a point.

Clouds like bruised orchids bloomed over the Pearl. After brunch with a friend, shopping on Hawthorne, and a lunchtime hookup with her sort-of-boyfriend John, Daisy was in a much better mood. She drove with the windows open, down Lovejoy and across the Broadway Bridge, the weird trolley tracks bumping beneath her tires. She found the tracks, which had appeared out of nowhere, troublesome. Were you supposed to drive on them? Was a trolley going to suddenly come flying her way? Could she get electrocuted?

“Rio” played on the oldies station. “Hey now, whooo,” she sang, tossing her sweater in the back. She’d just changed lanes, out of the trouble zone, when Matt texted: <Swoop me and B up?>

Daisy called him on speakerphone. “You have to be exactly where you say you are. I’ll look once, and if you’re not there, I’m going to keep going. David and Opal have Junior Lifeguard at one.”

“Whatever. Why are you being rude?”

Daisy didn’t answer. She’d gone on way too many wild-Matt-chases to trust him.

Lucky for him, he and his girlfriend were exactly where he said they’d be, standing outside the Fred Meyer on Broadway. They looked happy clowning around, Bea drinking some sort of enormous pink drink, cute in jeans and a teeny-tiny crop top. For some reason, they were both peering into Matt’s beanie. Daisy honked and he sauntered to the car and climbed in front, making his girlfriend sit in back.

“Matt, be a gentleman and let the lady sit in front.”

“The lady,” he snickered.

“No worries.” Bea dumped her messenger bag on the seat and shook out her mass of curly black hair.

“You’re an idiot,” Bea cried, gazing at him as if he were the cutest idiot on the planet.

“Check it out.” Matt pulled a tiny black kitten from his hat. It hung from his hand, paws splayed, meowing pitifully.

“Oh, Matt. It’s so little. It looks way too young to be away from its mom.” Daisy loved cats, but this one couldn’t be more than five weeks old, so tiny it was almost repulsive in a wormy sort of way. “Whose is it?”

Bea smiled, leaning between the seats, smelling of smoke and the purple Victoria’s Secret body spray she sometimes left in Matt’s bathroom. “It’s mine, but Mattie’s going to keep it in his room until my dad calms down.”

Daisy’s hackles went up. “Oh no. We’ve got way too many pets. No way. The cat either goes home with you, Bea, or you two find someone else to keep it. And why is your dad…not calm?”

Matt and Bea looked at each other and laughed but didn’t answer.

“Where did this cat come from?”

“Where at the Starbucks?”
“It was just sitting there.”

“Sitting where?”
“At a table. Where do you think? Outside.”

“Yes, by itself.” Matt laughed. “Do you want its birth certificate?”

Bea was silent, and Daisy was getting a big whiff of bullshit, but did it really matter where they’d found the cat? What mattered was that it was not going to enter her home, not even for five minutes. “No cat,” she said, firmly. “That’s my final word.”

“Mom,” Matt cried. “We have no choice. It’s just overnight until her dad chills. Otherwise, he’s going to take it to the pound and let them kill it. Do you want kitten blood on your hands?”

“That’s a good name for a punk band.”

Daisy was silent. Confused. Wait, how was this her problem? She pulled away from the curb, sick of the constant negotiations, which she always seemed to lose. Why was Bea’s dad, Walter, the winner here? What made Matt and Bea listen to him and not her? He was some sort of musician who never seemed to work, only work out in snug shorts and a Bjorn Borg style headband. Walter stuck to his rules, and if Bea ever came home late, he locked her out, which caused her to return to Daisy’s house and spend the night with Matt, something Daisy knew was wrong, but how could she send the girl out into the night—she was only fifteen. Walter would have no cat in his home and Daisy would. How did that work? She looked at the scraggly creature perched on her son’s shoulder. It yawned, sticking out its tiny pink tongue. “Goddammit, Matt.” The cat mewed, its eyes big and glassy. “One night, that’s it.”

The kitten was asleep in Matt’s hat when they pulled up to the stoplight on Sandy, the scene of the morning biker attack. Daisy looked around, nervous. She felt shifty, but she couldn’t stop herself. A guy with dreads and ripped calves. A big bottom in a short skirt. No purple handlebars. Then she spotted it. On the telephone pole covered with tattered concert flyers was a clean white sign with block letters: CAUTION BICYCLISTS: ROAD RAGE VEHICLE. LICENSE PLATE – 577 SQL.

“Matt, I think that’s my license plate number. I think we’re the road rage vehicle.” Adrenalin shot through her as she imagined every militant biker in the city following her wherever she went, surrounding her car in their scuba suits with the padded butts, smashing her windows with their KryptoLoks, dragging her out onto the street, the strobe lights on their helmets blinding, all because of this little macho man in the seat beside her.

“Why are you whispering?” Matt looked amused.

“Get it down, get it down.” The light was about to change. The red hand on the crosswalk sign flashed as the numbers descended: 9 8 7… “Get out—go rip it down.” Matt started to argue but Daisy cut him off. “NOW.” 6 5… “I am not a road rage vehicle. You were the road rage PERSON. Now get out and tear that fucker down.”

Matt laughed. “You need to calm down. Take a Lorazepam. Dude’s a punk. I think it’s funny.”

Matt laughed even harder. “Then why are you screaming?”

This site uses Akismet to reduce spam. Learn how your comment data is processed.