On Monday, Pearl brushed her teeth with salmon-flavored toothpaste and got dressed for school.  When she climbed on the bus—moldy windows and torn seats—her best friend Poppy, who everyone called Seed, smiled and said, “Mmmmmm, salmon.”

“What did you use?” Pearl asked.

“Chicken, like always.”  Seed sighed.  “Mom won’t let me try salmon until all the stupid chicken is gone.”  She pouted prettily, and the bus driver slammed on the brakes and shouted, “Butts in seats.  No lie.  Do it now or you’re all out on your asses.”

Pearl laughed a loud, look-at-me laugh and purposely raised her butt off the seat.

Seed, now the lone loud laugher on the bus, looked alarmed, and Pearl smiled inside, glad that her mom had bought her the salmon toothpaste the first time she asked.

On Wednesday, Pearl hopped up the steps of the bus, her secret sparkling inside like soda pop.  “Sup, bitch?” she said, climbing over Seed to the window seat.

Seed looked alarmed.  Her tight, pink twists pulled up her eyebrows, adding to her look of surprise.

“What is it?” Pearl asked as the bus lurched into traffic.  A car honked, and the bus driver laid on the horn for a full thirty seconds before blasting Led Zeppelin.  It sounded like a machine stomping metal in a factory.

“It’s…different,” Seed said, a pretty grimace on her face.  “What kind did you use?”

“Peanut butter,” Pearl burst out, louder than she’d intended.  She had been so excited, her secret bubbling and fizzing ever since she saw the new flavor at Safeway.  Peanut butter? she’d thought when she saw the nut-covered tube on the shelf along with the other teen pastes.  And then, Of course…peanut butter, and for a brief second, the world had made perfect sense.

But now, Seed was making a face and delicately pinching her nose, like the peanut butter was a bad choice, like it was wrong in some way Pearl had never anticipated.  She turned away from Seed’s sympathetic grimace.  She felt shame and like she hated her friend.  Seed, she thought, the voice in her head dripping with disdain.

On Friday, the bus driver eyed her as she climbed on the bus.  Gary, Pearl thought because that was his name.  Gary was crying, sobbing really, Gary like a giant lump with pig-bristle hair and mournful eyes.

What is happening? Pearl thought.

Gary honked his nose into a hanky and told Pearl to “move it along.  You kids don’t care.  You don’t even know my name.”

The bus pulled away from the curb slowly, as if it too were sad.  A song that sounded like crying came over the speakers.

Pearl sat by Seed but ignored her, which was the best punishment she could think of.  As she stared out the window, raindrops sliding and flower petals stuck to it, she could feel Seed staring at her, pleading for attention, and it made Pearl feel powerful and happy.

She had thrown her peanut butter toothpaste away thanks to Seed.

Her mom had yelled “No more waste in this household” when she found the nut-covered tube and told Pearl that no, she was not going to drive her to Dutch because now she was mad.  Really mad.  So Pearl did not get to go to Dutch and she had to use the peanut butter toothpaste—the bad toothpaste—because that’s all there was left—thanks to Seed.

“Pearl,” Seed whispered, her voice urgent.  Pearl could smell her chicken-scented breath, her normal breath, like a cat, a normal cat, and she suddenly felt so desperate and alone tears burned her eyes.

Pearl inhaled and exhaled slowly.  She imagined she was lying on a lounger next to the pool at the club having the best day of her life, all by herself because Seed was no longer invited to come along; Seed was never going to be invited again.  Ever.

Seed poked her in the ribs, hard, and Pearl whirled around.  Oh it’s on, she thought, excited—maybe more excited than she’d ever been.  “What?!” she cried, glaring at her former friend.

“You know Danny B?” Seed asked in a low voice, nodding at the boy with eyes the color of river water sitting across the aisle playing sad drums to Gary’s sad music on the seat in front of him.

“Like, yeah,” Pearl said.  “Do you think I don’t know the cutest boy in eighth grade who, by the way, said Sucks, brah when I cried when I fell up the stairs after choir?”

“Yeah, well, what you don’t know is that he uses peanut butter toothpaste now too.  He started last week and now all the eighth-grade boys are using it and even some of the girls.”

“That means you were ahead of everyone.”  Seed whipped her ponytail over her shoulder.  “You knew peanut butter was good, and it was.”  She clapped the next words out: “You.  Are.  A.  Boss.”

Pearl stared some more.  She could hardly believe what a boss she was.  “Girl…what?”

Is this happening? Pearl thought.

A moment later, brakes shrieked and the back end of the bus flew up and onto the curb, smashing into a tree, sending kids flying into the aisle.

“What the fuck,” Gary said.  He stood and gathered his bag like a purse, like Pearl’s grandma’s purse, and walked off the bus.  Nobody else moved.

Pearl looked at the heap of kids in the aisle.  She saw feet and a trumpet and a beanie without a head.  Her eyes met Danny B’s and he smiled, his hair black with blood. 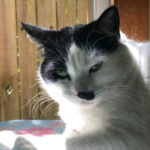 Peanut butter, Pearl thought, and for a moment everything made perfect sense.